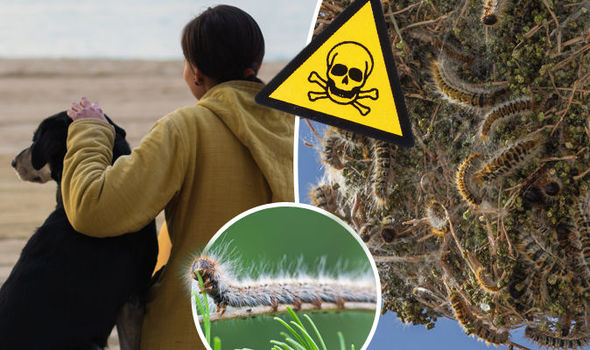 A species of caterpillar which can cause illness in humans and death to pets is invading Spain, police have warned.

Pine Processionary caterpillars, while small and fuzzy, can cause serious health risks to pets – including swelling, vomiting and death.

And the tiny bugs also threaten human health – potentially causing dermatitis and severe allergic reactions. The peculiar pests are easy to spot, getting their name from the way they move one-by-one behind each other in a long queue.

They are also capable of shaking out a poisonous dust that can cause breathing problems – and firing their hairs like harpoons into anything they feel threatens them.

The hairs can cause irritation if lodged in a dog’s paw, and death to the unfortunate pet if they attempt to lick away the irritating barbs. And pets lucky enough to survive may have to have their noses or tongues amputated.

The seasonal pests return every spring, threatening the safety of pets and people in the region. Police have called on anyone in the area to stay vigilant – and keep away from areas the poisonous critters are spotted in.

Spain’s Pest Control Association said: “They pose a major risk to children and adults causing dermatitis, eye damage and severe allergic reaction and in pets even death.” It comes as experts claim trillions of ‘invisible’ insects are migrating from Europe and could threaten our ecosystem.